The first thing I’ve done when I become (again) team coordinator was to organise a “pizza and ticket party”. As the client missed to give clear directions and list priorities, the team piled up dozens of tickets. We could not just work extra hours to fix the problem. We needed to build a new spirit. So I suggested a pizza dinner at our company office. We distributed beers, connected to the client environment and for one hour we worked all together just answering and closing tickets. Then we decided the toppings, ordered and had them delivered, finishing a few more tickets meanwhile. We bond close together and the next week I put on a virtual one-hour meeting every afternoon for “ticket party”. Soon after that week, the backlog of tickets from the last three months had decreased from 50 to 5 and the client was happy again.

The motivation is the biggest resource to gain productivity and quality. This is where I aim to when I coordinate a team.

That is the logic promoted by Harold Jarche at his blog. I fully agree with it.

You receive a tip, an idea, a task. You investigate, develop, solve the problem. At the end you share the solution, improve others knowledge, document you discoveries.

At a work environment this can be pushed by the usage of a wiki. Everything should be documented on the wiki. And if possible this wiki should be open to the world, showing the best practices developed by the organisation.

Still there are a lot of detractors to this approach

A way to get a collaborator (team member) to sense and share is to promote internal and external conferences and to promote the sharing of the work in order to improve at the same time global knowledge.

More and more as I read HBR or Harold Jarche RSS feeds that I consider the role of facilitator more important than the role of manager or project manager.

The facilitator or coordinator of a team or a project including 1 or several teams has as main task to make progress easier. This role is the same as a chancellor – its original meaning – which is:

The unique manager is, in my humble opinion, devoted to end. Until now the manager position is a power position that includes decision taking. The team members under a manager have to follow the direction the manager wants, even if the majority of the team is against.

In a healthy organisation each team member can be manager of a small sub-project and several manager can exist within a team.

Decision should be taken together by the majority of the team and the sub-project manager can just throw his arguments to convince others and untie if there is no majority.

Then is the role of the facilitator/coordinator/chancelor to ensure the decision is followed and to report to the director.

Was about 15 years ago I heard the first time about the role of facilitator. It was in terms of open-space discussion from my university professor António Dias Figueiredo and Artur Ferreira da Silva.

Since then I’ve been trying to employ this at my work. For 5 years at CERN I did coordinate meetings, report my database group to the whole IT department. Now at Nespresso I try to do the same even though the organisation is not yet prepared to move away from the powerful manager hierarchical model.

Competition in medical services is turning more and more against the unfortunate. In Portugal during Christmas week a public hospital had to get extraordinary funds to pay for doctors from a private provider as there were not enough available in the free market. This is a consequence of having several private hospitals also providing emergency service which also need doctors. But the poor cannot pay those private services and end up waiting several hours to see a GP.

Trains and train lines – usually part of a public service – are also decreasing in Portugal (and Europe) due to bigger competition from private airlines and bus companies.

In Switzerland it has been proved that where more medical private practice exists, higher are the total costs of medicine. Competition among private hospitals to become “the best” center has made them to invest on expensive machinery. To recover the investment they need to use these machines and not required treatments (in terms of benefit vs cost) are prescribed.

Still in Switzerland, no private bus companies can compete with the excellent but expensive train and postal bus system which deserves all villages. If the state would allow competition the trains would lose passengers in the profitable axes and not being able to keep running at loss smaller lines.

Another example is the postal service. The people expect the state to provide postal distribution and services (payments, expedition) all over a country. But when competition exists in part of the postal service (packet distribution or postal service in main cities), then the public provider will have less resources from the high profit zones to invest on loss in distant areas, where there is no profit.

This is why public services and competition do not combine. It is very difficult – if not impossible – to have a light regulated private sector in the areas where the state is expected to provide public service. The consequences are:
– no public transport in remote areas. They are feeding with few passengers other public transport which in turn will also be non-profitable and which is important for tourism
– no profitable “mandatory” public service like postal, energy, communication
– remove the access to poors – “access to all” – to public services

The solution in my opinion is to set a minimum group of public services where the state highly regulates and avoids almost any competition. Medical services, transports, postal services, utilities (electricity, water, sewage, telecommunication) is the absolute minimum. This is the only way the access to all can be preserved. These public services will always be run at loss in big parts of a state. Only cities and major axes can compensate this loss by having a profit and at the end become even.

I like to promote this latter way of sharing as it benefits also those who are afraid to ask (dumb questions?) and those who are just curious. If the blog or wiki are public this can be even better as more people who don’t know the “expert” can profit.

Sharing through a blog or wiki should be thought and feedback given so the presentation improves. People should be given time to blog, to document into wiki and motivated to follow what others share.

This way we increase in a cheap way the global knowledge of the organisation and, within fields of speciality, its prestige. 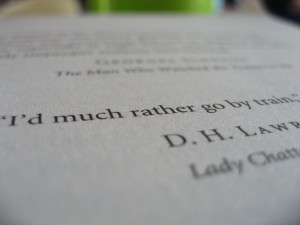 At least three days a week I’ve a 75 minute commute to work. Fortunately I can use it for achieving several objectives of the day. Without that commuting need, I would not do accomplish those objectives.

I start with bicycling about 15 minutes to the train station. It gives me fresh air, exercise and frees my head from all thoughts as I’ve to pay close attention to traffic.

The 45 minute train ride is used to either read the paid newspaper I received early morning at the mailbox or to perform exercises from my German course. No work related activity.

After a 5 minute walk I wait and catch a bus for a final 10 minute ride. I profit this time to read the RSS feeds I follow like HBR or Harold Jarche on management and Pythian on Oracle databases. I consider this time as learning time related to work, while at the train is learning time not work related.

The way back home I redo the same. It allows me to free myself from labor related tasks and arrive home mind free from any work related issue.

This is possible as I don’t own a car and public transport in Switzerland is reliable and comfortable..