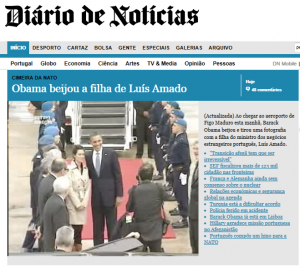 This is the front web page from one of the “reference” newspapers in Portugal. The title says: “Obama kisses the daughter of Luis Amado [Portuguese Foreign Affairs Minister]”.
Living in Portugal would be, for me, like being in a TV reality show in permanence. Fortunately I got banned from the country long ago and now I go there just to enjoy what remains good: family, food and sun.


Seeing the americanization of the society (I believe it was in the US that all this lack of sensibility started, pushed by the capitalism and populism) makes me feel sad that there is no one with power to stop it. At least in the country where I was born.