One of my first tasks as IT responsible of Pro-Vélo Genève is to replace the usage of Dropbox and the 300USD paid yearly for the service.

Dropbox is a great service, but just too expensive for an association where most of the people are volunteers and the budget is limited.

Other elements to know:

My first thought was to use this backup area and have some software that make use of it. I found FTPBox which uses FTP and your own host to keep the files in the cloud and synchronize them.
After installing it seemed quite nice, until the first error:

And these kind of errors kept appearing with the usage. I could not use this with people that are not at ease with computer. Moreover there is no OSX client.

I went then to ownCloud.org. I’ve installed on my website and after a few errors it worked. Then I installed the latest client, but again I was receiving errors: 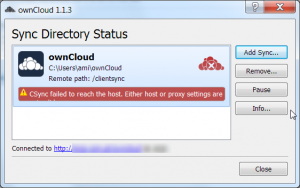 When using the old client it worked better. However there were still two problems. The icon in the taskbar does not show the activity. It is always like this:

And and website of the association, where I want to install it, runs PHP 5.2 while ownCloud requires PHP 5.3. I could request to change but that would mean that I need to make sure that all the rest of the CMS system continues to work.

Still I found GoodSync which is more a backup than a synchronization program. It allows to synchronize FTP site with a local directory but lacks a folder watcher that triggers the synchronization as soon as one of the parties changes a file. It does a periodic check which re-reads the whole directory and can be slow if you have a lot of files. Also if you go to the folder that is being synchronized you never know at which state the files are. It is not geared to teams and it did not take my trust it would work well with open files, multiple saves, etc. Plus it costs 30USD per computer you want to install it, which is a quite high investment.
I went back to check the Dropbox and alternatives.

The whole is very well made. The only incovenient is that when you work in teams and go further than the 2GB free, every member of the team which uses his personal account (because of other usage of Dropbox), he is also obliged to buy the 100USD supplement for the files that are shared with him (and so are synchronized to his computer). At some point it is fair, but it is expensive!

This is the best solution of them: cheap (10USD/year for 27GB), easy to install and use. However it requires Windows Vista and OSX 10.7… Old computers you can forget. It is a pity, as the software is very good, even for Mac!

This new player does not offer yet paid accounts, so you cannot go further than the 5GB you can get for free.

It seems to have it all: compatibility, sharing, relatively interface (while I like a lot the possibility to choose any folder to share, I’m affraid it is not the most straight forward idea for ex-dropbox users. Costs 50USD/year for 30GB

As the option above, it also provides everything you need and the interface is more similar to Dropbox, which makes it easier to use. The only point against it is that I’m afraid someone uses already GoogleDrive and did not tell me and then it will be difficult to share the account (for free). Google Drive costs 30USD/year for 25GB.

Last but not the least, there is a Dropbox portable, which allows to use multiple Dropbox accounts in the same computer. This solution would decrease the price paid by the association to only one user, or 100USD/year for 100GB. Still more expensive than other solutions above.

While I’m still not 100% decided (I really liked SkyDrive), I think I will have for the moment to decide between SugarSync and GoogleDrive, hoping that during 2013 the FTPBox or ownCloud solutions will be in better shape and easy to install and use by non-technical people on Mac and Windows.

* Dropbox portable allows to skip the requirement that other users have to pay if they also use the software for personal usage.